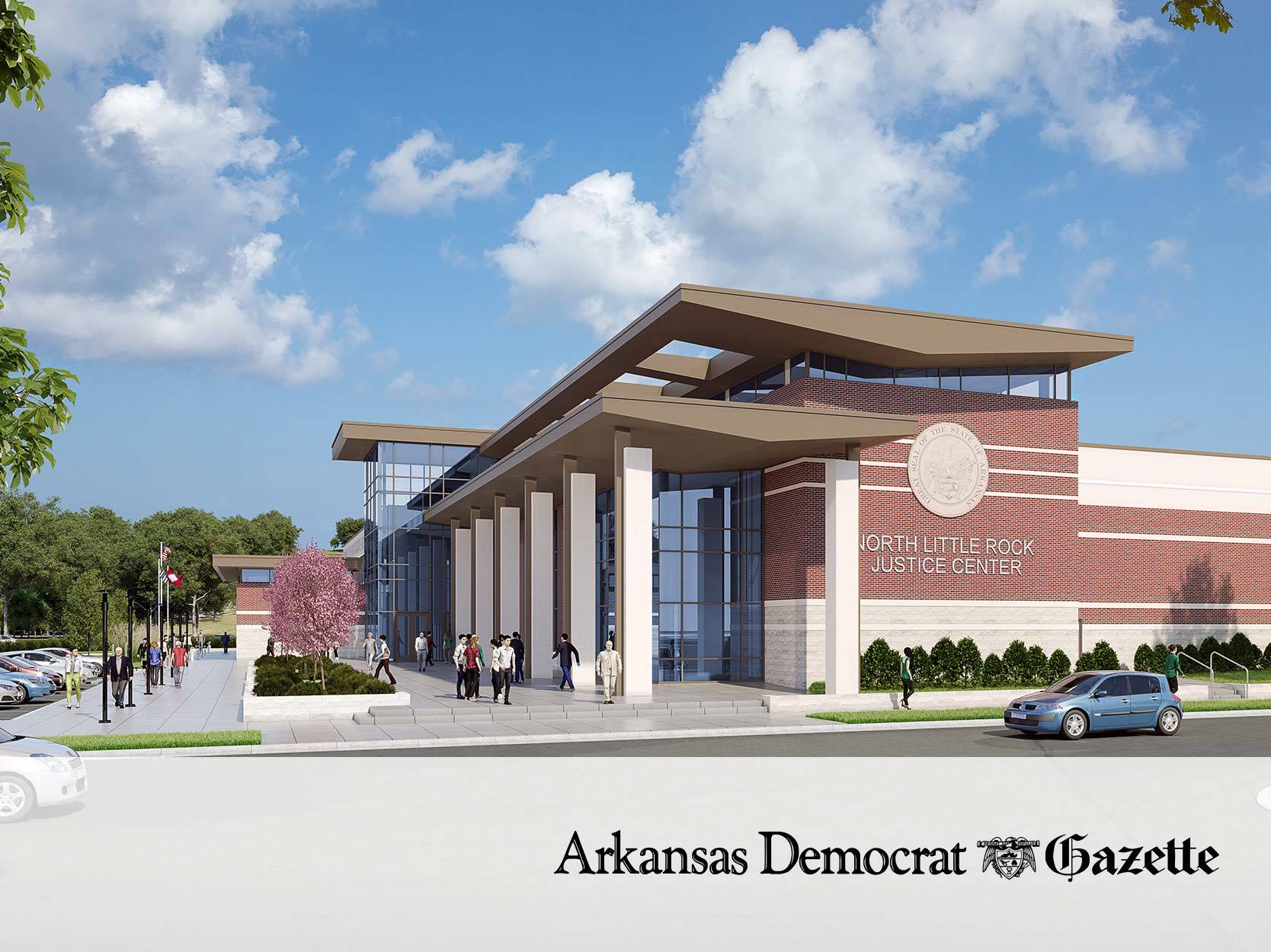 The North Little Rock Justice Building will unite the city’s Police Department under one roof for the first time since the early 1990s, city law enforcement officials said.

North Little Rock Mayor Joe Smith, and city council and law enforcement members took part Thursday in a virtual tour of the planned facility led by Hoefer Welker, an architectural, planning and interior design company from Leawood, Kan., that is working on the complex. Officials hope the complex will be completed by late 2020.

The justice center will be in the 2600 and 2700 blocks of Poplar Street, where the Arkansas National Guard’s Fisher Armory and the North Little Rock School District administration building are now. The city agreed with all parties last year on a land exchange, plus a $500,000 payment by the city to the school district to acquire the properties.

Using computer software, the firm showed every part of the proposed 80,000-square-foot complex that will feature a sleek brick-and-glass exterior.

LED lights will surround the roof of the two-story building, which will allow the facility to be lit up at night. Also, the colors of the lights can be changed easily, said Ken Henton, the principal in charge at Hoefer Welker.

“There is lot visibility from the highway,” said Chris Krumrei, a designer with the firm. “We wanted to establish this was the face of North Little Rock.”

Replacing the city’s police and courts building was a big part of a sales tax package that the city put to voters in 2017. The current building at 200 Pershing Blvd. dates to 1961, when the Police Department had about 100 fewer officers. The courts annex was added in 1964.

North Little Rock voters approved the 1% city sales tax in August 2017 that included a five-year, one-half percent tax that would go toward building a new police and courts building, improving fire stations, and correcting street and drainage problems citywide. The tax was projected to raise $20 million for the new police and courts facility.

Design team members worked with police administrators and judges to determine what best met the wants and needs for a justice center that is intended to last into the next half-century.

“I would say we had 90% of the input on the design of the building,” Capt. Jay Kovach said. “We got input from officers to receptionists on the design. Then Hoefer Welker brought their experience to bring the ideas to life.”

The idea of unity is spread throughout the design of the building. Currently, the Police Department is spread over five campuses and four substations throughout North Little Rock.

For example, the new center will have two entry points in the back, one under a canopy and another in the center of the building.

Such features were done on purpose.

“We are trying to create elements of the design that unify the department again,” Henton said. “Get people to interact on a day-to-day basis. Trying to get the parking lot set up where everyone filters into the same entrance together, just by getting people to come through the same door, is one goal to create unity amongst the force that has been separated for quite a while.”