The ribbon cutting ceremony for the Olathe Police Station Expansion project was held on Monday, July 12, 2010.  The 42,000-square-foot addition is part of an ongoing partnership with the City of Olathe.  This project was the second phase of a three-phase initiative to expand Olathe’s public safety campus.  HWA previously designed the Municipal Court, completed in 2004, located within the campus.

This new two-story facility integrates the departments of the police force, which had previously been operating out of several different buildings, due to a lack of space.  The Olathe Police Station building contains multiple offices, work areas, exercise rooms, locker facilities, interview rooms, storage space for evidence, a crime lab and break areas. 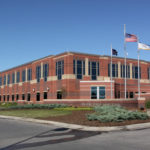