Starting Out: It’s OK to Fail

Pick your jaw up off the ground and hear me out. Not too long ago (OK, you caught me! It’s been almost a decade), I was a perfectionist student. Failure was not in my vocabulary. I came into the workforce ready to succeed. My path was clear.

Yet, the real world isn’t like school; there aren’t always clear answers or books to tell you how to complete tasks. Quickly, I felt I was failing. I failed at tasks. I failed at design concepts. I failed clients. I failed at jobs altogether.

After several years, I realized that without those failures, I never would have learned from my mistakes. I never would have discovered all the exciting opportunities out there if I’d followed that clear path. You cannot succeed without failure because, without the failure, your skills and ideas grow stagnant.

My hope for you, as a new employee, is to do just that: fail. Be brave and vulnerable in your new world. There isn’t always a right way of doing something. Be ready to put your ideas on the table and get constructive feedback. Be open to learning new things. There are so many knowledgeable people with different backgrounds, so be curious and ask questions. You won’t grow if you don’t understand what you’re trying to accomplish.

One of my new favorite quotes by Teddy Roosevelt, stolen from the genius Brene Brown, explains:

“It is not the critic who counts; not the man who points out how the strong man stumbles, or where the doer of deeds could have done them better. The credit belongs to the man who is actually in the arena, whose face is marred by dust and sweat and blood; who strives valiantly; who errs, who comes short again and again, because there is no effort without error and shortcoming; but who does actually strive to do the deeds; who knows great enthusiasms, the great devotions; who spends himself in a worthy cause; who at the best knows in the end the triumph of high achievement, and who at the worst, if he fails, at least fails while daring greatly, so that his place shall never be with those cold and timid souls who neither know victory nor defeat.”

I wish you the best of luck and hope your path is unique to you, guided by your creativity and openness for learning. 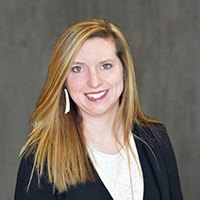 About Chelsea – Chelsea graduated with a Master’s in Interior Architecture from Kansas State University in 2011. She has been at Hoefer Welker since 2016, working on commercial projects in the interior design studio. She loves seeing how design can solve problems, like putting pieces of a puzzle together. In her free time, she enjoys hanging out with her husband, Jake, and 3-year-old daughter, Charlie. Besides trying new restaurants, exploring Kansas City, and doing Orange Theory, she completes live-in, house flips.